The Morning Answer with Jen and Grant  is sure to get your morning started off right.

The Morning Answer with Jen and Grant discusses a range of topics from the top news stories of the day, politics and world events to breaking news and popular culture with a sense of humor and poetic flare, entertaining and informing the growing AM870 The Answer listening audience.

Jennifer Horn brings years of experience in local and national radio to The Morning Answer. Jen’s father had a long career in radio and Jen explains that radio is “the family business.”

Grant Stinchfield focuses on the issues important to freedom-loving Americans. He's made a career of exposing government waste, fraud and abuse. And as a former four time Emmy Award-winning investigative reporter, Grant provides a unique insight into media bias and how the mainstream media actually operates. 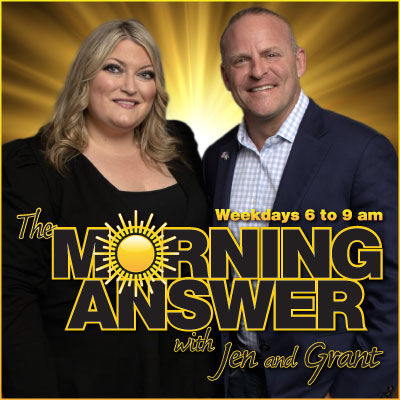 Jennifer Horn grew up in the radio business.  In high school she started working for her dad and CRN Digital Talk Radio.

After getting a Bachelor's Degree in Journalism and Public Relations from California State University Northridge, Jennifer had the opportunity to take on fill-in host duties on CRN's "PM Show."

In December 2013, Jennifer began fill-in duties on The Morning Answer.  Finding a passion for politics, both locally and nationally, Jennifer was paired with local political activist Don Dix and The Jen and Don Show was launched on AM590 The Answer in January 2015.

During the exciting, controversial and exhilarating Presidential campaign of 2016, Jennifer's unique understanding and ability to articulate the appeal of the Trump phenomenon brought her to a permanent Co-Host position on The Morning Answer.

Jennifer is a voice over artist and has worked on several movies and commercials.  She enjoys volunteering for important charitable foundations and political campaigns.

As an avid sportsman and firearms enthusiast, Grant has made it one of his top missions to defend the Second Amendment. He's been around firearms since he was a child and, whether it was trapshooting with his father or running a tactical course with law enforcement, his love of guns compelled Grant to get his federal firearms license.

Grant focuses on the issues important to freedom-loving Americans. He's made a career of exposing government waste, fraud and abuse. And as a former four time Emmy Award-winning investigative reporter, Grant provides a unique insight into media bias and how the mainstream media actually operates.

Grant is also a successful entrepreneur. He has founded, bought and sold numerous businesses. He currently runs a long-haul trucking company as well as a large auto care business; both of those companies are located in Dallas, Texas.

Grant has made it his mission to expose liberal lunacy and the ills of socialism. Our American way of life is under attack. It is our job to defend it.